Clive is escaping the corporate world after 20 years as a marketing executive to become a freelance consultant. He is leaving the world of high cost marketing campaigns to help small business owners build brands on a budget.

Clive’s wife Carla is a qualified accountant and will help with the business admin and finances in whatever time she has left after looking after their two preschool kids.

Their only major asset is their home with a mortgage to service.

How should they structure their affairs?

Clive and Carla have three criteria:

They know that business is risky and insurance won’t cover them for everything that may go wrong.

To protect themselves from potential liability to the business risks, they decide to form a company. They incorporate Clive’s Consulting Limited to own and run the business.

Clive and Carla are both shareholders (owners) of the company. As it is a limited liability company, the most they stand to lose is a nominal amount of, say, $100 they will pay for their shares. The company takes the risks, not the shareholders.

The company needs at least one director who will have responsibilities to manage the company and comply with company law. As Clive is primarily running the business, doing deals with clients etc., he will be the sole director. Directors can be personally prosecuted if they do something reckless, so they don’t see any need to expose Carla to those risks.

They’re happy that the company will reasonably contain the business risks, but their biggest fear is losing their house. What if Clive is help personally liable for failing in his director’s duties and sued for millions?

Owning their home in their personal names is always going to leave it vulnerable to their personal risks which may or may not be related to the business. Personal disputes with neighbours or causing a forest fire could leave them with a liability they cannot pay.

They decide to form a trust and transfer the house into that. Once the house is owned by the trust, it is no longer in their ownership and so is out of reach of their potential creditors.

Confident Clive has plans to grow his new company into a high value investment that he can sell in the future to fund a comfortable retirement. As they now have a trust to protect their assets, they decide to put the company in their too.

On the advice of their accountant they form their company with 100 shares. 98 shares will be owned by the trust and one share each by Clive and Carla. Holding a share in each of their personal names gives them the flexibility to pay themselves shareholder salaries from the company without deducting PAYE.

Clive is confident he can generate fees of around $130K with business expenses of $30K, leaving $100K profit in his first year of business. So how will that be taxed?

A company is a flexible vehicle for managing income tax, splitting the $100,000 profit between the company, Clive and Carla.

Clive and Carla need money to live on. As shareholders, they can take money out of the company during the year to live on. They won’t pay PAYE on this as they will take it as drawings which is effectively a loan from the company. They will be taxed on their “shareholder salaries” determined at the end of the year.

Let’s assume Clive’s confidence is justified and he does make $100K profit in year one. Once the year has finished and the profit is calculated, shareholder salaries are worked out. 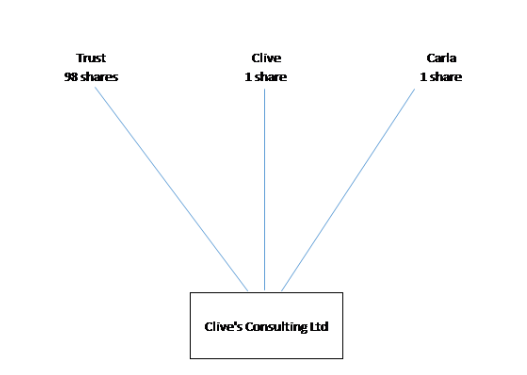 Carla has worked a few hours a week. They have worked out a fair market value for this work is $20K. This becomes her shareholder salary which is an expense in the company accounts and income to Carla. The company deducts the salary expense reducing its profit to $80K. Carla’s tax return is filed, and she pays tax on her $20K income. Her tax is calculated at her individual tax rates being 10.5% for the first $14,000 of annual income and 17.5% on her next $6,000. Her tax on her $20K salary comes to $2,520. 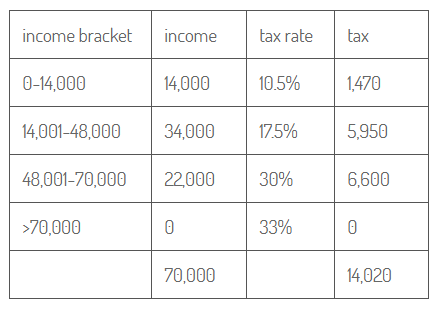 Clive has generated most of the profit through his personal efforts. His shareholder salary must reflect that, so they allocate him $70K. Clive pays tax of $14,020 on this, calculated at his individual tax rates as follows:

Overall, they will pay $19,340 tax, an average rate of 19.34% on the $100K taxable income. They could save tax by paying a higher salary to Carla and less to Clive. Carla would pay 17.5% tax on additional income up to $48,000, while Clive would save 30% tax by reducing his income. However, if the shareholder salaries do not reflect the actual market values of the services provided, IRD could see it as tax avoidance and disallow the income split.

If Clive was operating as a sole-trader rather than through a company, he would be personally taxed on the whole business profit. At $100K, his tax would come to $23,920, an average rate of 23.92%. This is because any additional income over $70K is taxed at the top personal tax rate of 33%. With the company setup, this additional income is split between Carla’s tax rates of 10.5% and 17.5%, and the company rate of 28%. 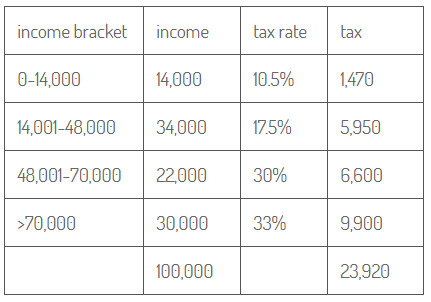 As a sole-trader, the business could still pay Carla some income. However, Clive would have to register as an employer and get permission from IRD to pay a wage based on the value of Carla’s work. The business would have to deduct and pay PAYE monthly.

Clive and Carla have a small business and a house. It doesn’t justify or require a large complex structure. What is involved in this structure.

Incorporating a company in New Zealand is quick and cost-effective. Clive and Carla should be able to get an accountant to setup their company, including the required IRD registrations and preparing the initial company minutes and registers, for around $500.

Setting up a trust is more complicated. A trust deed will be drafted detailing who will manage the trust (the trustees), who will benefit from the trust’s assets (the beneficiaries), and the rules for running the trust. Presuming they use a lawyer to draft this deed, it may cost them between $1,200 and $2,400. Moving the house into the trust will incur some additional conveyancing fees of, say, a few hundred dollars.

Clive, as director of the company, must ensure it meets its statutory obligations. This includes preparing:

Generally, these will all be completed by an accountant as part of an annual compliance job. The business would require financial statements in some format whether it was owned by a company or not.

The ongoing trust management should require minimal work. The trust will only need to file a tax return if it receives taxable income from any source. Just owning the house and company shares will not require a tax return.

An annual trustee meeting and recording of minutes will normally suffice.

Choosing a Business StructureACC for Business
Scroll to top